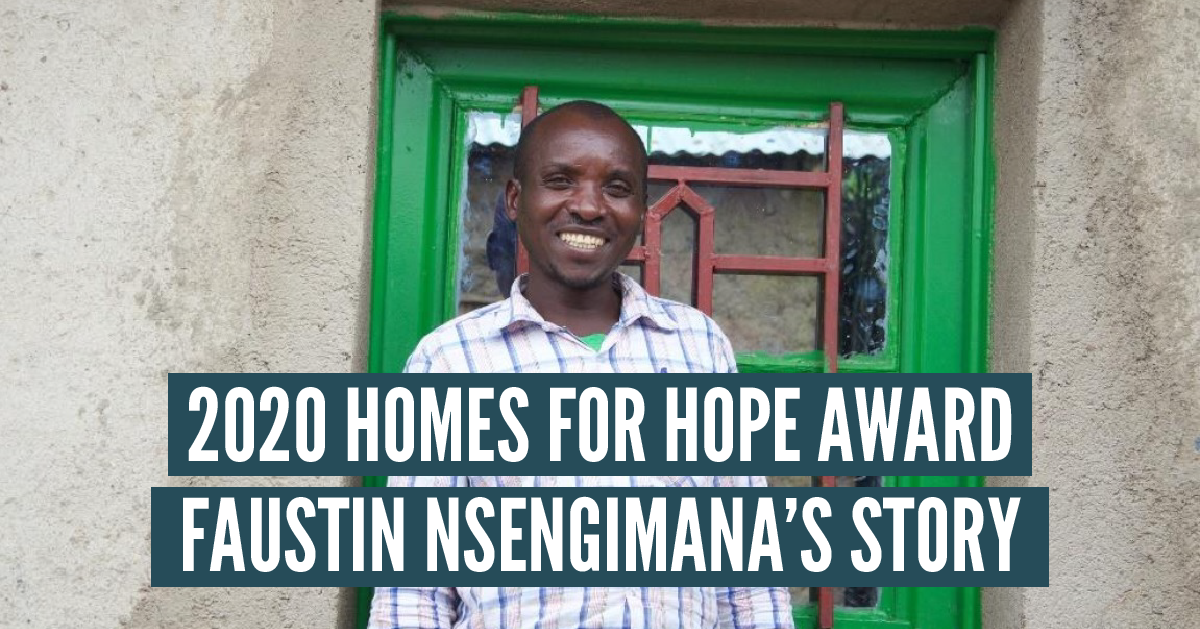 Prior to becoming a Christian eight years ago Faustin Nsengimana’s life was a mess. Faustin was an alcoholic and in terrible physical condition. He severely neglected his family. He was physically and emotionally abusive to his wife and kids, and careless about his kids’ education, food, health insurance, and other basic needs. Faustin said that his kids would sit at home while he drank because he would not pay for them to go to school. He also said that he didn’t even really know what “mutuelle” (health insurance) was at the time. He was only concerned about himself and getting drunk… “I only saved my money in bars.” At his lowest point, he realized that God had bigger plans for him. He quit drinking cold turkey, joined the local church, and started taking the humbling steps toward living a life worth living.  Faustin told HOPE staff that if we could have seen him before he became a Christian, we would not even believe it. He said people in the community considered him as dead. “They knew that I would never change and that I’m just waiting for death to take me. I agreed with them because that’s how I thought too. Now I feel like I’m born again. I was not willing to live this [way any] longer. It has been only God who helped all the way.”

He faced adversity from the start: distrust from the local community based on his reputation, the hurdle of starting to pay for his family’s basic needs like food, insurance, and school fees, and the slog of saving 20 cents a week to get his feet under him. Going from a self-serving lifestyle of ignorantly blissful drunkenness to having to work on other people’s land for extremely low pay takes integrity, persistence, faith, and longsuffering commitment. Faustin had to work long days for little pay, and then come home and prepare for tomorrow without his normal outlet of drinking: something he had never before been used to doing.

Despite these challenges, after joining the church his life was completely changed. His wife can’t believe that he is the same man she once knew! He started to gain the trust of his family and community more and more, and the pastor of the church suggested that he join a savings group. He became a follower of Jesus and has since spent six years in savings groups. His first savings group provided the momentum necessary to start climbing upward: first paying for his family’s insurance, then his kids’ school fees, and putting food on the table. And then making investments in his family’s and his community’s future. He is now a devoted husband and father. He has made sure that all 5 of his children are also in savings groups and have their needs taken care of. Faustin went from rock bottom – an abusive alcoholic – to a pillar of the community. He is now a church facilitator, overseeing 16 savings groups, and he holds 7 elected positions in the community working with local government to serve his community, his neighbors, his friends, and his family. Furthermore, he recruits others to join savings groups, showing them that if he can succeed, change his life, and find a relationship with Jesus, everyone else can as well. He is the perfect example of transformation: someone who literally went from near death to life. His whole story revolves around how God is the only strength and foundation that could pull him out of the hole he was in.

Faustin and his wife have since bought land and fixed up their house. He said that before, the house was falling in, the roof was made of old tiles, and you would not have been able to figure out how it was still standing. Today their house is reinforced, painted with a metal roof, and Faustin has built additional structures on his land for storing tools. Realizing the need for housing in his community, he has used some of his savings to build homes for neighbors to rent. He and his wife have also purchased more farmland and bought livestock to do animal husbandry, all while creating jobs for laborers who do not have their own land to farm. We at Homes for HOPE are so grateful for the transformative work that God has done in and through Faustin as he faithfully serves his family, church, and community. Please join us in celebrating and praying for Faustin Nsengimana as the 2020 Homes for HOPE Award winner!

Please consider joining us for a free, two-part virtual event series to hear how the communities HOPE International serves are weathering the coronavirus storm and how local staff, volunteers, and partners are responding to needs. We’ll also share how you can join us in coming alongside entrepreneurs as they rebuild their dreams. Click below for more information and to register!